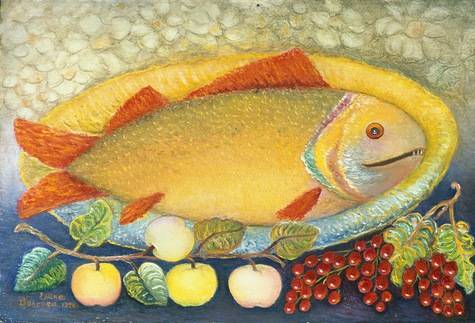 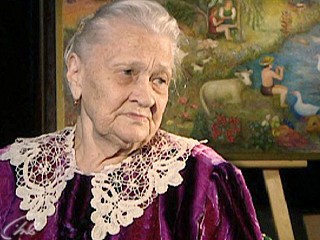 Elena Andreevna Volkova (June 3, 1915 – October 8, 2013, Елена Андреевна Волкова)
Elena Volkova was born in 1915 in the Ukrainian city of Chuguyev (birthplace of Ilya Repin) from a modest family, her father was a swimming coach, her mother, a peasant. In 1934 she began to work as assistant-projectionist for a mobile cinema. During the war she was affected in an hospital; her husband died during the war. Without any artistic training, she began to paint at the beginning of the 60s at the age of 45. Elena Volkova lived in Moscow.

In 1947, Elena Andreevna a son, Valentin, who began to study painting. It was then that she took his son paint, Volkova turned herself to the painting (in 1961). Her first work was still life on cardboard, then appeared narrative compositions.

Artist’s House at Kuznetsky Most, Moscow, 1980;

Museum of amateur creativity of the peoples of the RSFSR (the Saviour Yefim Monastery), Suzdal, 1985;