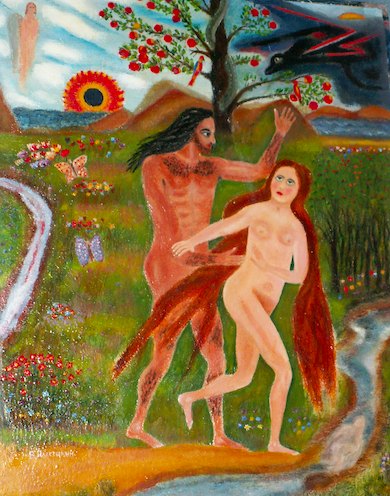 (ПЛАСТИНИН Василий Васильевич, 1907-1983) He was born and lived in Vladimir, his profession was railroader. To drawing he turned when he was sixty. He depicting scenes from the history of the ancient city of Vladidimir, where he lived all his life. He also wrote two versions of “Expulsion from Paradise”, which is very unusual for a Soviet amateur artist. Plastinin’s manner is typical of the naive artist with lack of prospects. Image of people, especially the riders, recalls the ancient Russian icon. Among the most notable works are historical: “Murder of Bogolyubsky”, works about Alexander Nevsky and Minin and Pozharsky. In the painting “Old Vladimir” PLastinin depicted famous people who visited the city: Herzen, Lenin, Mayakovsky and Lavut. Pictures written by Plastinin have tight, bright, sonorous colors, in principle, unusual for most naive an artist nicknames, saving ink.