Neonila was born in the Belgorod region in the village of Great Trinity in 1923. That is, now she is 90 years old. She has a lively mind and a beautiful Old Russian language. She speaks a lot about the war. About how their village was on the occupied territories and in their house came two Jewish woman, who asked them to hide. They were dressed in peasant clothes, trained especially of peasant life, and so they lived year. And once their house became a German patrol and … (I immediately remembered a scene from the film “Inglourious Basterds” Quentin Tarantino). But it all ended well, and Jewish women was not identified.

Then the Germans retreated from this area, and Neonila was the nurse at the Kursk Bulge. At the hospital they did not even have bandages. People were dying one by one from gangrene. One soldier chased her down the hall, demanding to give any sort of cure for gangrene, and she ran away. The next day the soldier died, and he was placed in the frozen shed where the rat runs into the open mouths of frozen bodies. She wrote letters in hospital, mostly funerals.

After the war Neonila married, she went to Abkhazia and worked there as an accountant. She retired and began to paint for pleasure. Her whole house was filled with paintings.

In 1991, the war with Georgia sterted. Gunmen broke into her house and stole all the paintings: have decided that they are very expensive and they can be sold. For a while, Neonila lived in ruined house and then moved to Moscow with her daughter and granddaughter. At first they lived as refugees, and to earn money for herself and his family, grandmother started to draw “cards”, as she herself calls them, and sell them near subway station. 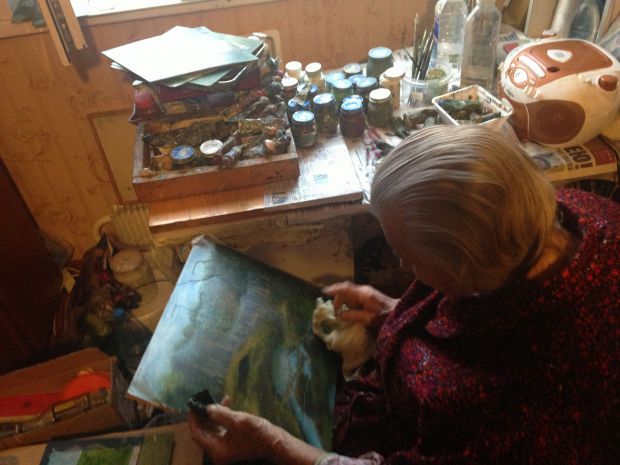